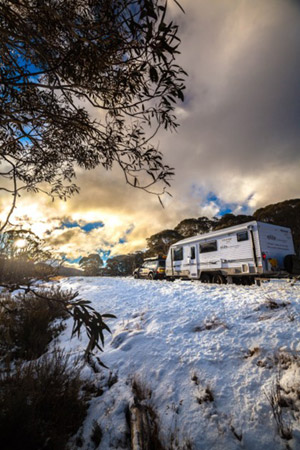 Family of four, Cain, Karly, Ellie and Finn call their Elite caravan home. They live in the caravan and travel endlessly to destinations which offer them adventure and excitement.

The family's travels sees them exploring all sorts of terrain and on this particular trip, we get an insight into their adventure in the snowfields at Perisher Valley in NSW.

The following article is an exerpt from their blog. To read more about their Perisher adventure and all their other escapades, visit the following link.

We arrived in the Perisher Valley on the 28th of July 2017, excited at the prospect of calling the foothills of the Snowy Mountains our home for a while. Much of Australia is subjected to a variety of intense and variable types of weather, however, unlike other places on earth, very few areas in Australia experience snow. This means we rarely get the opportunity to see it falling, and rarer again to see it settle and even camp in it.

The snow was fresh and white, the air crisp and the sky was filled with patchy clouds which turned gold as they gracefully floated by. The campground was located a few kilometres down a windy road which led off the main drive to Perisher. Even with an altitude of 1280m there were only small remnants of snow on the ground. 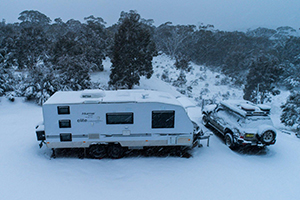 After arriving at our new home at island bend campground we searched for a suitably sunny spot for the solar panels. We found a spot however it was one of the highest locations in the campground. The trade off to finding this sunny location was that it was one of the most exposed sections available. We knew this would subject us to the alpine winds that often blow through the camp but as we were camping entirely off grid, we needed the sun to charge the batteries. The view out the front door of the van was beautiful. It was brilliant looking outside each morning with coffee in hand to the mountain backdrop in the distance and at snow once it arrived.

As Finn was just 9 days old when we arrived in Perisher Valley we thought it best to keep the van warm during the nights. When we purchased the van we were recommended a webasto diesel heater to keep us warm. Never having owned a van before, we didn't even know diesel heaters even existed, however we thought it might be a useful addition as we almost only ever camp off grid.

This turned out to be one of the best and most used investments during our stay at the snow. It ran non stop throughout the nights and would often run for up to 14 hours a day, during the evenings, night and mornings and when the weather turned ugly throughout the day. Diesel consumption was very good. Webasto claimed around 0.2 litres per hour and we would tend to agree with this figure. We used alpine diesel in it and thankfully didn't experience any of the diesel gel up. Never once did it miss a beat.

We enjoy off grid travelling. It allows us to travel to more remote places and often experience a greater sense of nature not to mention travelling off grid saves us a lot of money. It is important to have the right setup when en devouring to travel this way or else things can become a little difficult. It doesn't take much but there are a handful of things that are crucial to making it an easy and enjoyable experience. We will discuss some of these things in a later article.

For power and water we used the generator on only two occasions to top up the charge in the batteries to ensure the diesel heater would last the night but otherwise the whole power system work extremely well. As for water we were fortunate enough to have the Snowy River close by. 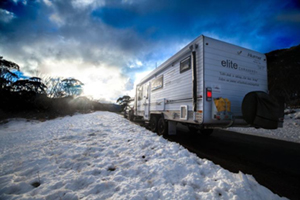 The experience was amazing although it wasn't without its trials. Travelling in this way is always going to throw you curve balls. We often say that our journeys are far from holidays, they are adventures, and with adventures come highs and lows, but one thing is for sure, regardless of them, we always come out the other side stronger for the experience and with amazing memories that we will forever cherish.

Some days were long and trying, for us and the kids who were restless at times. There were moments when tensions were a little high and it was impossible not step on one another's toes. The hardest times were had in the wind and the rain as it left us marooned inside the van. In one instance we had over 200mm of rain fall in just two days! There's not a whole lot you can do in those conditions.

There were some long nights, if we were lucky enough to have both kids down for bed, it wasn't long before the blasting winter winds were hammering the side of the van which soon woke them up. Gusts were often registered nearby to exceed 100km/h. The snow would blast through camp and hit our There were nights where the van would shake for what felt like hours on end. The howling wind and gusts could be heard approaching through the valley long before they arrived and slammed the van.

Although at times a hindrance, it was none the less a memory we will never forget, lying in bed and hearing the approaching winds and feeling the van take the full brunt of its power. It was loud, powerful and relentless. In the severe conditions it would force cold air through the vents and into the van where it would over power the warmth of the heater. It goes without saying, it was cold, and the real temperatures were reflected not in the thermometer, but in the apparent windchill readings which often plummeted below -16 degrees Celsius.

We would like to thank Cain and Karly, and their children Ellie, and Finn, for sharing their experiences with us. We wish them many safe and fun journeys in their Elite caravan and we look forward to hearing from them again with more tales from their trips.